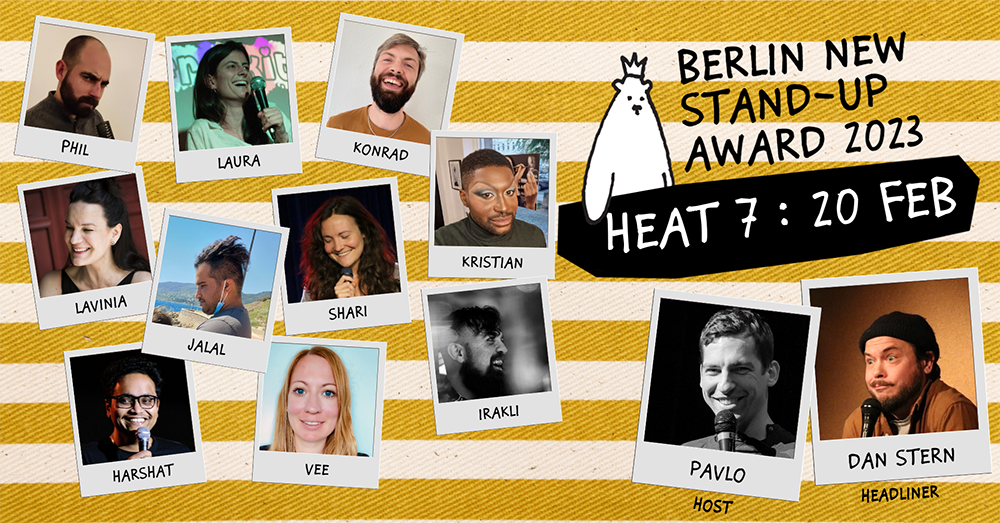 From the United States, now based in Berlin; Daniel Stern is a former talk show host, a retired competitive eater, a screenwriter, actor and stand up comedian. Stern’s live performances are a manic, sweaty collage of anarchic wit, earnest confessions and stories about riding the bus. His acting resume also includes dramatic roles, voice work and a bit of tasteful partial nudity.
In 2021 Daniel Stern Founded “PodFest Berlin”, a grassroots podcasting festival for Berlin’s podcast creators and fans.
Daniel podcasts with Berlin news show Radio Spaetkauf and has produced countless live shows with titles like “Motherfudgers”, “An Hour on the M41 Bus” or the sort of eponymous “Staniel Dern Show”. Stern took last place behind three children in an NBA Summer League half time dance-off.

Born and raised in Ukraine, confused and dazed in Berlin, Palya is still looking for the meaning of life and the best burger joint on Earth. During the day he’s a comedy writer producing funny content for TV and YouTube. Then, when the night comes, Palya replaces his keyboard with a microphone and sweatpants with better sweatpants and brings laughter to live audiences around Germany and Europe.

Get your tickets here: https://berlinnewstandupaward.com/events/